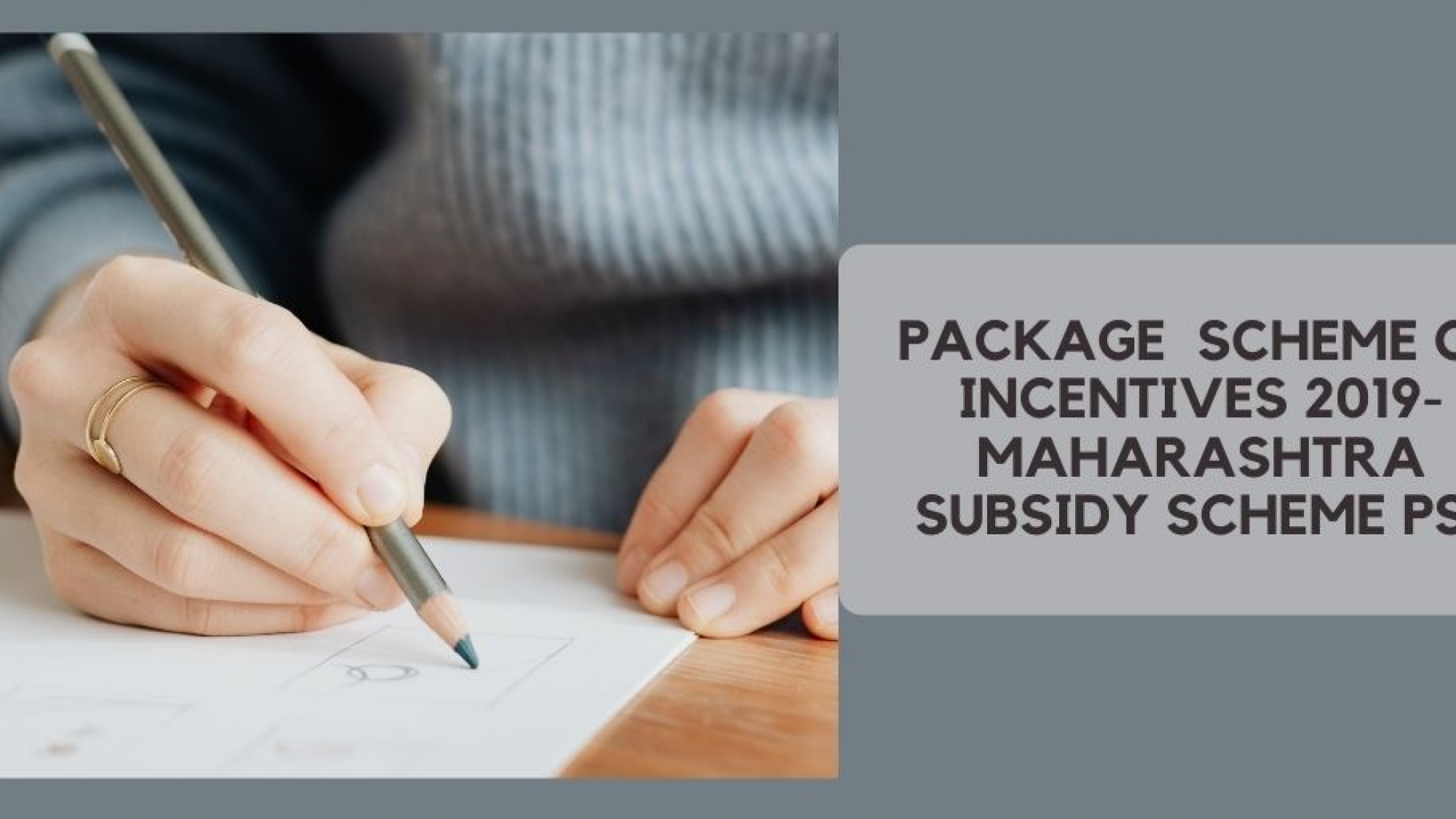 2019, as may be amended by the Government from time to time, shall remain in operation from the 1st April 2019 up to 31st March, 2024 or till the new Package Scheme of Incentives comes into force.

Coverage under the PSI -2019 The following categories of Eligible Industrial Units in the Private Sector, Cooperative Sector, State Public Sector / Joint Sector shall be eligible to be considered for incentives under the PSI- 2019

Classification of Areas for PSI-2019

For the purposes of the PSI- 2019, detailed taluka-wise classification of different areas of the State as Group, A /B/ C/ D/ D + etc., on the basis of their level of industrial development shall be as given in Annexure-I to this G.R. where –

(ii) Group B: Denotes areas where some industrial development has taken place, but are less developed than the areas under Group A.

(iii) Group C: Denotes areas, which are less developed than those covered under Group B.

(iv) Group D: Denotes the lesser-developed areas of the State, not covered under Group A/ Group B/ Group C.

(vi) No Industry District: Denotes District having no industries viz Hingoli and Gadchiroli.

Special LSIs: For MSME unit, as defined in para 2.2 (i) above, the ceiling of gross fixed capital investment is Rs. 50 Crores.

An Existing Unit shall mean and include:

(ii) A Unit which has been granted an Eligibility Certificate(EC) as defined in Para No. 2.7 or has availed of any incentives (excluding Stamp Duty) under any of the Earlier Schemes, or

(iii) A Unit which has filed a valid application for grant of an EC under the PSI-2013 with any of the Implementing Agencies on or before the 31st March 2019. 2.5

A New Unit shall mean a Unit which is set up for the first time by an entity in the Private Sector / Co-operative Sector / State / Joint Sector in any Taluka where there is no Existing Unit set up by the said entity, provided that such Unit satisfies the following conditions:

a) It is not an Existing Unit.

b) At least one of the Effective Steps is completed on or after the 1st April, 2019 for setting up the Unit.

c) It is not formed as a result of re-establishment, mere change of ownership, change in the constitution, reconstruction or revival of an Existing Unit.

1) The eligible New / Expansion Micro, Small and Medium Manufacturing Enterprises, which are set up in different parts of the State, will be eligible for Industrial Promotion Subsidy (IPS), as per there taluka Categorization.

2) Eligible Micro, Small & Medium enterprises shall be offered Industrial Promotion Subsidy (IPS) on 100 % Gross State Goods & Services Tax (SGST) payable by the unit on the first sale of eligible products billed and delivered within Maharashtra. The modalities for disbursement of incentives shall be as per the guidelines issued vide GR dated 12.06.2018, 20.12.2018 and 08.03.2019 and the guide lines issued from time to time.

All eligible new Micro, Small and Medium Manufacturing Enterprises will be eligible for interest subsidy in respect of interest actually paid to the Banks and Public Financial Institutions (excluding unsecured loans, private loans / borrowings, loans from NBFCs etc.) for claim period, on the amount of term loans taken for acquisition of new Fixed Assets required for the project accepted by the implementing agency. The amount of interest subsidy will be calculated @ effective rate of interest, after deducting the interest subsidy receivable from any agency of the State Government or under any Govt. of India Scheme and the penal / compound interest or 5 % per annum, whichever is less. The quantum of interest subsidy payable to the eligible unit every year will not exceed the bills paid for electricity consumed during the relevant year.

All Eligible New Units in Group C, D, and D+ areas, No-Industry District(s), Aspirational Districts and Naxalism affected Area will be exempted from payment of Electricity Duty during applicable eligibility period. In Group A and B areas, only eligible 100% Export Oriented Units (EOUs), Information Technology Manufacturing Units and Bio-Technology Manufacturing units will also be exempted from payment of Electricity Duty for a period of 7 Years. Necessary Notification under the provisions of the Electricity Duty Act 1958 will be issued separately by the Energy Department.

New Units as well as Units undertaking Expansion / Diversification will be exempted  from payment of Stamp duty during the Investment period in Group C, D, D+ Talukas, No Industry Districts, Aspirational Districts and Naxalism affected areas for acquiring land (including assignment of lease rights and sale certificate) and for term loan purposes. However, in Group A and B areas, stamp duty exemption would be available as given below:

Explanation: Eligible New / Expansion Units of PSI-2013 and PSI-2019 will be eligible for Stamp Duty Exemption during their admissible investment period.( mentioned in para 2.9) Necessary Notification under the provisions of the Bombay Stamp Act 1958 will be issued separately by the Revenue & Forest Department.

Eligible New Micro, Small and Medium Enterprises (MSME) and Small Industries will be eligible for power tariff subsidy. The subsidy will be to the tune of Rs 1/- per unit for the Units located in Vidarbha, Marathwada, North Maharashtra and the Districts of Raigad, Ratnagiri and Sindhudurg in Kokan Region, No Industry Districts, Naxalism Affected Areas and Inspirational Districts and Rs 0.50 per unit for the Units in other areas of the State for a period of 3 years from the date of commencement of commercial production, for the energy consumed and paid. The Units in Group “A” areas will however not be eligible for this incentive.

(i) 5% subsidy only on additional capital equipment acquired for Technology Up-gradation, subject to a maximum of Rs. 25

(ii) 75 % subsidy on the expenses incurred on quality certification limited to Rs. 1 Lakh.

(vii) 50% of the cost of Capital Equipment under the measures to conserve/recycle water, limited to Rs. 5 lakh

(viii) 50% of the cost of additional Capital Equipment for improving energy Efficiency, limited to Rs. 5 lakh

(B) Incentives for Credit Rating of MSMEs, 75% of the cost of carrying out Credit Rating by Small Industries Development Bank of India/ Government accredited Credit Rating Agency, limited to Rs. 40,000.

(C) During the policy period, first 250 SMEs in all areas of the State, based in Maharashtra, fulfilling the criteria for listing, which will be enlisted on the SME Stock Exchange, Mumbai will be be given refund of listing expenses equal to Rs. 6 lakhs or actual C.A. certified listing expenses, whichever is lower. The detailed modalities for getting this refund will be issued

If any company wants to make investment in Wada which is D+ zone in such case, in following manner refund can be claimed.

Under the scheme, for unit in D+ zone, the State Government will refund 60% of total capital investment in the entity, over a period of 10 years. The refund will be given by way of SGST and Interest subsidy.

Thus, if Rs. 10 crore is capital investment in a D+ zone, the financial incentives available are as follow:

Hence, unit will be eligible to get refund of Rs. 60 lakhs in each year.

Further, unit has taken bank loan and on such bank load paid interest @12% of Rs. 24 lakhs. So from such interest only 5% interest is allowed to take refund. Hence, up to Rs. 10 lakhs can be taken as refund. In such scenario following amount can be claimed as interest subsidy:

Based on above working, total maximum refund can be claimed as follow:

Hence, total refund can be claimed of Rs. 60 lakhs. In addition to such refund, unit can also claim subsidy of electricity duty, stamp duty waiver etc.